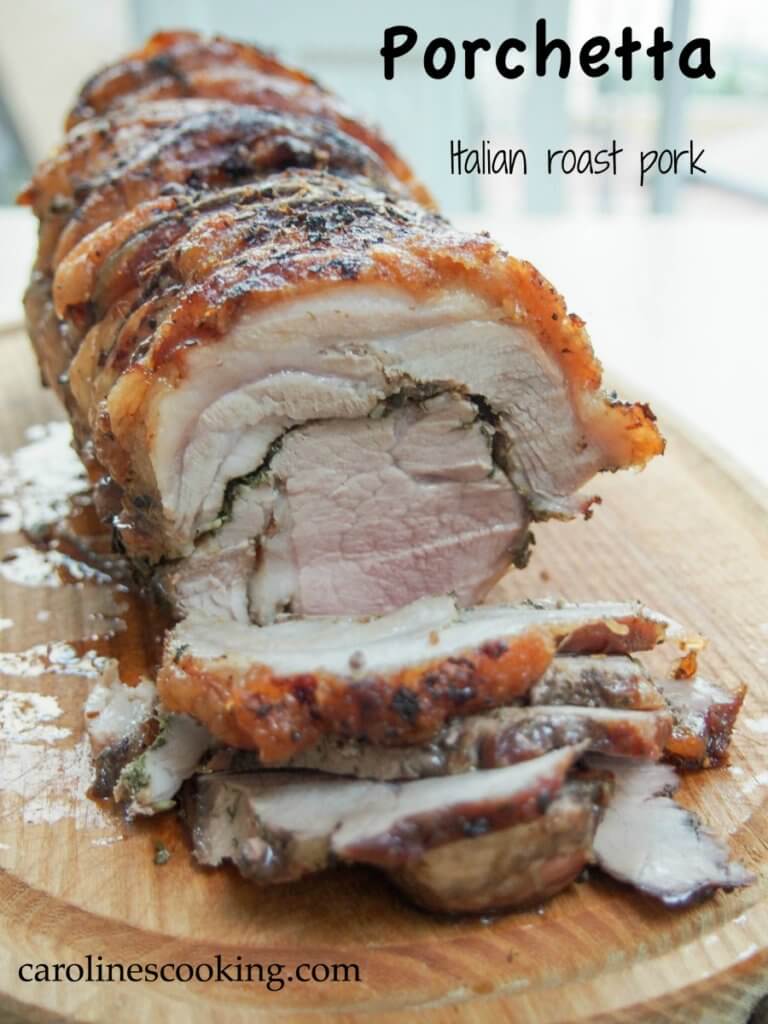 Porchetta is a classic Italian pork roast that's also great in sandwiches. Left to infuse with herbs, fennel and salt overnight, the flavor is delicious, the fat crisp. So good.

This post may contain affiliate links, where we earn from qualifying purchases. See more details in the policy page.

A few weeks ago when we were reviewing the add-on options for our meat delivery, I saw pork belly as one of the options and immediately thought of porchetta.

I had never made it before, but had memories of eating delicious porchetta sandwiches from food stalls in London years ago and decided it was about time I gave it a go. So, the pork belly was ordered and a plan was hatched.

After doing a bit of research, it's another of those old recipes that has many variations, so I came up with the following that tries to make the most of the tasty herb and fennel filling/marinade without being too complicated. It was certainly incredibly delicious and fed us with tasty sandwiches for days (in fact we still have some leftovers in the freezer).

How do you make a porchetta?

On the face of it, it might seem like a bit of work to make porchetta because of the time involved, but there really isn't that much hands-on time. Let me break down the steps:

The day of cooking:

Much as I love pork belly (as I explain in my delicious crisped pork belly with whisky-soy sauce), for this recipe it's best in partnership. After looking at a few options on making porchetta, I decided the best way to make it was with both a pork belly and a pork tenderloin, to be most like the cut originally used in traditional recipes.

This gives a good balance of both fatty and less fatty cuts to balance fattiness, meatiness and flavor, without you having to do a home butchering job as some recipes I saw would have you doing. It also makes a more reasonable size of roast for a small to medium-sized crowd.

It's important to give a blast of the hotter oven at the end as this crisps up the skin. However keep a close eye on it so it doesn't burn. And look how beautiful it becomes!

It's also incredibly tasty, thanks to that rub. And the fact it's crisped pork belly which I think is always good, even if it isn't necessarily the healthiest. But everything in moderation, right? As you can see there's a whole lot of delicious meat in there too, and it also takes on all that tasty flavor.

Porchetta is a great dish that you definitely need to try at least once. It makes a great main for a holiday or party - some simple sides like roast potatoes and greens would work well. And while big, it's just as good if there are less of you, since as I say the leftovers are great in sandwiches and you can freeze it. I might just have to order a pork belly again soon to have some more.

Try these other delicious roasts:

Tools to make this

Remember to pin this for later. 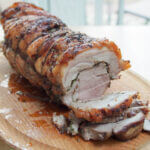 See some of my favorite cooking tools and ingredients in the Caroline's Cooking Amazon store.

This site uses Akismet to reduce spam. Learn how your comment data is processed.

Welcome! I'm Caroline and this is where I share recipes inspired by travels, places I want to go, or just ideas from feeding the family. Most recipes are easy to make and healthier, but there are treats too!