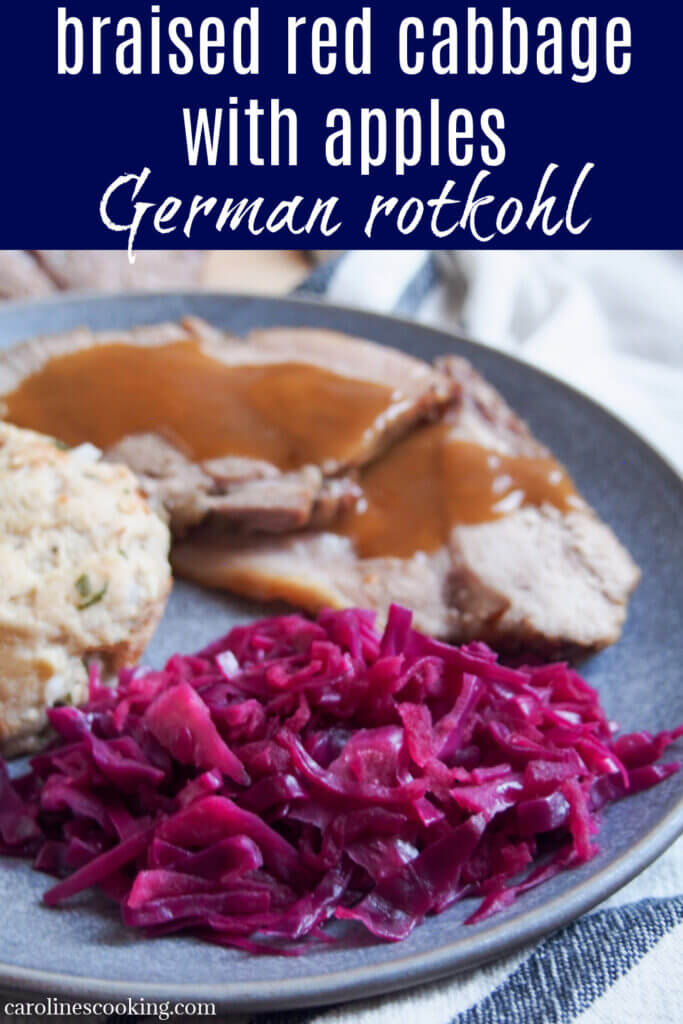 This German red cabbage with apples (Rotkohl or Blaukraut) is a classic side that's a delicious mix of sweet-sour flavors with a mildly aromatic spice. It's easy to make and comfortingly tasty.

This post may contain affiliate links, where we earn from qualifying purchases. See more details in the policy page.

I know for many, Germanic food is not necessarily the easiest to like, apart from maybe the comfort-factor of things like Wiener schnitzel, spaetzle, German pancake soup and Kaiserschmarrn.

Even for me, and I was brought up visiting Austria ever year or two, I find I need a change after a week or two of traditional foods.

Many traditional German and Austrian dishes are heavier partly as they came out of the need to sustain a predominantly farmer population. They would burn through a lot of calories working in the fields, so needed hearty meals.

It can all get a bit heavy if your lifestyle is not exactly matched, though. There are a good number of meat dishes, especially pork, and bready things, but not too many vegetables.

It's maybe not a completely fair image, and they wouldn't be alone in that trend anyway (hey, I'm from the UK, not exactly known for it's cuisine, although that, too, I think is a little unfair).

But I think even most Germans would agree that, traditionally at least, there is a bit of a tendency towards only a small range of vegetables. You'll find plenty of potatoes, of course, (like German potato pancakes), then some dishes with mushrooms.

If there's anything else as a side, you're probably looking at a simple salad, white asparagus, green beans or cabbage.

Braised red cabbage with apples is one of my favorites, and so I was always happy to see it on the menu.

I don't know if that's partly because it's also something you find in the UK (though maybe slightly different), especially served with a Sunday roast. But I think it's mainly that it's so comforting, gently sweet and with a fragrant spice undertone.

You may be most familiar with German-style cabbage in the form of pickled Sauerkraut or as a crunchy salad, but this braised dish is also an incredibly popular side.

You'll find a few variations in the ingredients, though in general they are pretty simple. Nearly all include a little vinegar which adds a slight sharpness, but also helps to preserve the red color of the cabbage. You can see photos here where I served with sausages and experimented without vinegar - the flavor is less tart but the color doesn't hold as well.

Most version include some aromatic spice, either cloves, juniper or both which adds a lovely depth. Then as braising liquid, you'll see either juice or red wine used. Apple juice is probably most common but I like orange juice for a little more freshness/fruitiness. Juice in general is my preference as it adds a little sweetness.

Not all versions include grated apple, but for me it's a must, both for sweetness and flavor. Onion also helps round out the flavor. Some add a little sugar or red currant jelly to balance out the more sour vinegar or wine, if using. Feel free to add half a tablespoon of either at more, if you like.

The key is to not rush the dish, but cook it low and slow to become nice and tender. It's a great dish for making ahead, as suits. Just store in a container in the fridge and reheat as needed.

This cabbage dish goes with lots of different meaty mains, such as sausages or roast meats (it mops up the gravy as well!). Roast vegetables pair well too.

Easy to make, comforting and with a lovely mix of flavors, this braised red cabbage with apples is a classic Germanic side that pairs well with so many dishes. Perfect for an Oktoberfest feast and so much more.

Make this a meal with these German mains and other sides:

Some people add up to around ½ - 1 tablespoon sugar or red currant jam towards the end to give it a slightly sweeter edge, and also richness if using the jam. Feel free to add some, to taste.

See some of my favorite cooking tools and ingredients in the Caroline's Cooking Amazon store.

This post was first shared in September 2017 and has been updated, primarily with new photos and added video.

Try these other ideas for Oktoberfest:

Remember to pin for later!

This site uses Akismet to reduce spam. Learn how your comment data is processed.

Welcome! I'm Caroline and this is where I share recipes inspired by travels, places I want to go, or just ideas from feeding the family. Most recipes are easy to make and healthier, but there are treats too!